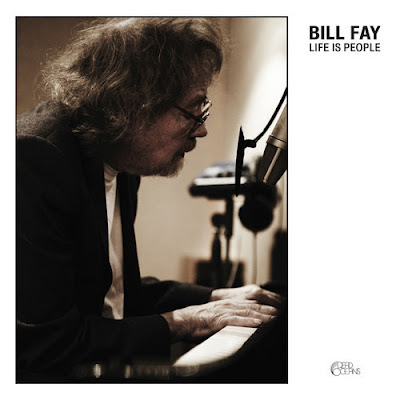 "Hard-won wisdom from the forgotten man of British singer-songwriting, retired hurt since 1971's masterly Time Of The Last Persecution. Now in his late sixties, but undimmed as tunesmith and observer of people, Bill Fay returns on August 20, with a third full album, entitled Life Is People, on Dead Oceans. MOJO has heard it and can attest to its moving brilliance, while Bill's collaborators - including Matt Deighton, Mike Rowe and Wilco's Jeff Tweedy - have played a blinder. Close your eyes and let the essence of Bill - wounded, soulful, trimmed with gospel - wash over you."


URL : http://www.verygoodplus.co.uk/showthread.php?35239-Bill-Fay-Life-is-People
"I've recently been listening obsessively to the new BILL FAY LP, Life is People.
I did a swift write-up of it for a forthcoming Shindig and will be doing a much longer piece on him soon.
Here's the short one . . .

BILL FAY: The enigma returns
There's a great scene in the current HBO series Treme, set amidst the chaos, anger and wry fight for everyday dignity and survival that is post-Katrina New Orleans, where a young and recently arrived violinist, Annie, is walking home from a John Hiatt gig with Harley, a street troubadour and sage counsel, ably played by Steve Earle. Annie is dissecting Feels Like Rain, a song she fell in love with at the concert, trying to unpick its greatness by connecting the water-based metaphors to the catastrophe that has befallen the city and seeing in the lyrics' tale of endurance a parallel with the riders on the storm here and now. Finally, Harley reveals the song was written over twenty years ago when "you still had training wheels on your bike and nobody had ever heard the name Katrina – and THAT is what makes it a great song!"

This captures in a nutshell my feelings about Bill Fay and the multiple meanings he holds for me. The man's music has long served as a kind of balm, a personal charm against whatever the world may hurl. His slowly emerging catalogue, consisting obviously of the two early 70s Decca Nova LPs, as well as the retrospectively collated and released Tomorrow Tomorrow And Tomorrow and From The Bottom Of An Old Grandfather Clock, is full of songs that soothe the soul with their calm and stillness, their repetition, their religious undercurrents; songs that seem deeply moral and deeply wise, without ever being ever remotely hectoring; songs that are opaque and elliptical, which speak of an old England that lives on only in memory and that yet are also somehow timeless. They are also songs I've lived at key junctures in my life. To give but one example, following the birth of my daughter, I played Tiny perhaps a thousand times, clinging to its rapture as we span in a whirl of confusion and delight,

On hearing that Bill was back in a recording studio (one ten minutes from my house!) laying down his first proper LP since 1971's harrowing Time Of The Last Persecution, my initial feelings were a mix of delight at knowing he was still among us and trepidation. Let's face it, these re-emergences rarely deliver more than sentimentality and shadows of former glories. Even when listenable, new material hardly ever hits as hard as long loved early work.

I downloaded my advance zip file of the forthcoming Life Is People LP, noted with some small optimism the supporting cast (which includes Matt Deighton, who's done stints with Oasis and Paul Weller, a few serious session men and Ray Russell and Alan Rushton from the early days) and sat back waiting for the disappointment to kick in. Halfway through the fifth song, The Healing Day, I suddenly found myself in floods of tears as a great sea of emotions somehow connected to my relatively new state of parenthood, my dad and his flat south London tones and my own creeping sense of mortality, surged through me, swept along by the elegiac sweep and slow soar of the strings. I've heard plenty enough music already in life to have a somewhat jaded – or as I prefer to think of it, refined - palette – but this utterly destroyed me. I played it twenty times in a row and was left speechless.

Be learned of this one thing: this is a VERY special collection of music that transcends any notion you may have of old legends retreading the boards. It speaks of endings and darkness, of humility and kindness and it moves more than anything I have heard in simply an age."
Publié par Unknown à 11:24