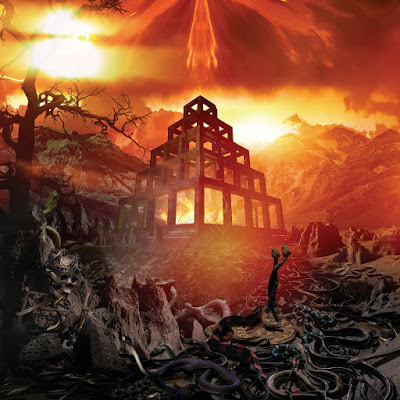 The Anglo-Saxon online services like bandcamp or Rate Your Music didn't change a fondamental thing : our possibility to reflect about the music we're listening to, and why we are listening to it. It isn't necessary to get a vinyl sleeve in your hands, or a jewel case, to be absorbed into the pondering of what an artist achieves.

Even if we only listen to music we're not innocents. Whatever is the support that is delivered to us, a contract still exists, linking us to the artist wer're listening to. Which results, most banally, into satisfactions or disapointments, only the vain artist being able pretending to surprise, all the others relieving only an expectation of satisfaction. The best we can get, is to be excited, struck by lightning, exalted when listening to an album for the first time. It would be interresting to ask ther advice to some real music fans, who've become ambassadors. It will be done.

Pondering, without religious connotation, is to wisely like accidents that drive a life and the very existence of a work of art as an album of music. To keep thing simple, every action, since the beginning of the world, has a invariable natural consequence that is part of the link of natural events. When exploding the Big bang has ordonned the first circumstance, and never had ordenned any more since that day. Since the first original explosion f material, it was necessary to keep going in exploring the human nature. This is what artists must do.
This exploratory and sacred nature is observed in all cultures, from Indians to Inuits, and into every art, and is smothered by television and religion. This is what are telling some of these musicians. « The Revolution Will Not Be Televised » once said the whole music, through Gil Scott Heron, in the 20t century. Some artists, tired to be dispossessed of their talents to take adavantage and to provoke accidents in the profit of « God », took to heart the threats on creation. This gave some of the most protesting moments in hard rock and heavy metal, during the nineties. Nevertheless, un modest art like heavy meta consists in being modestly a simple man and recognizing not having the necessary lugage for religion or religious « spirituality ».

Breaking the toy and destroying the throne

If we take the Bible, or if we are conscious of the natural evolution of the world which is not written, the results are very different. The first action Adam « did » has entailled the megalomania of the men who're trying, downstream of time, to accomplish grand gestures to return in the lap of the Creator. Take the character from a Werner Herzog film, Aguirre. You must observe how the superstitious conquistador is driven mad by granting himself an almost divine will, a power that finally abandons him. That is for sure a strong character, in spite of the fact that he refuses the natural order, that is, the accidents driving his destiny. Paradoxically, we ponder through him millenaries of cultures in which beauty and liberty were born of repeated accidents. Going down the river of time, things always came by accident.

It is not to get rid of superstition, but to ponder it as we do for the ruins of Palmyre, before they split at our face by destroying it. Our attachment to relics from the past is a superstition itself. Watching from a distance, that's what the Heavy metal or somber music like Doom metal does in particular. This is music were humility, pondering and poetry are frequent. Darkness are only watched remotely, with a reverence and an aestheticism equal to the one used by Herzog when he films in Koweit the oil weils in fire in his documentary Lesson of Darkness (1992). The pictures from this lesson are strangely alike the cover from a doom metal album by Shrinebuilder (2008). A sad and sorry world burning.

« The one the gods want to destroy will be driven mad before », was saying a character from the play The Maid of Orleans. The more he is vain, the more the believer in the existence of an only God will be driven mad, like Aguirre, and all those caracters remotely observed, in albums more humanist than it appears first. The multiple gods where a way to give a shape to our art, our poetry. « Against idioty, even the gods are fighting in vain. » This is the idioty to believe without doubt, and for that reason to never understand what the artists express and how they progress in their lives. This is the madness to not understand how to progress in our own lives without livng through religion. This is madness seeking to terrorise the man to empeach his natural evolution, from accident to accident, to a better sensibility and pondering of his nature.

After the terms of Mark Twain, it's always about breaking the toy and destroying the throne, and according to his superstition, breaking the toy is as important an event as the destruction of the throne, because without the first the second can't happen. The superstition is deeply anchored into the man, as is his pondering nature. One last time, those who observe superstition should not be mistaken for madmen. Like those who caricature should not be mistaken for those who are caricatured. There's no less mad than these artists who're working in the concrete things, into the earth. That's not only reserved to Heavy metal – even if this is the genre that will be approached here, through the passion that we have to ponder it ourselves, to appropriate it, to create our own history.