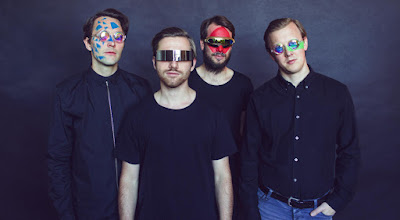 One of the things you made me think of, listening to your album, is Genesis, and i thought that maybe it was time to put those progressive influences back in the realm of danceable rock... I like Efterklang, to which i associated you a bit in my review, for the same capacity to be addictive... What are your inspirations for the diverse and surprising guitar sound ?

Ahh, thanks for thinking of Genesis while listening to our music! Genesis is a major inspiration for me, and for Morten (the bass player). I know Jens and Jonas probably like it too, but their taste for 60s/70s progressive music is not as strong as with me. We have quite diverse influences, but I don´t think anyone dislikes progressive rock, ha ha. I´m very inspired guitar-wise by melodic and progressive guitarists like Steve Howe and Steve Hackett. Also how Robert Fripp creates fluid lines has been very inspirational. What I think is the strongest and most unique aspect of Genesis, is their ability to create sections that evolve harmonywise in a way that is very organic. So I often think of their approach when creating music, and especially when improvising. When the groove can evolve simultanously with harmonic progressions is my favorite kick!

It seems that in that kind band, the drummer is the first element to pull the ever-changing ways of the music. What was his training to get to it ?

Jonas has got a masters degree in music, so he is educated enough. But I guess that he has played with so many different bands and constellations really has made him versatile. His way of grooving, being very loose but firm in the direction musically, makes him a great drummer for Atlanter-music.

How do you get successful nowadays ?

If we answer you on that, you will no doubt be fooled, ha ha. But if we define successful as doing what you want to do, something not defined by external parameters like record sales and such, I believe that if you follow your own unique calling and do what you feel is right for you, then you can´t go wrong. And that is a big personal success. Especially these days, when the temptation to be someone you are not, do something you really don´t want to do, is so overwhelmingly advertised, directly and indirectly, playing the music you most want to play is an act of success.

Does it takes to well define your sound for the listeners to understand were you come from and were yo go, or mystery is it an important part ?

Well, all four of us have a lot of differnt musical inspiration. But the most important part is that we are still able to play together, improvise and get a kick out of that. I think that is the most important factor. To enjoy playing together is the field from where refernces can pop out. Referneces just become empty words if it is not wrapped up in something fresh, and music played with inspiration is always fresh no matter the style or genre.

Do you read books, like the one by David Byrne, How Music Works ?

Yes, we baught in a book store in New York when we went there for a samll US tour a few years ago. I read the first part, but then I found it to be slightly boring although the information is very interesting. Another music book I really can recommend is "Supernatural Strategies for Making a Rock´n´Roll Group" by I.F. Svenonius! That is a great laugh and is the most truthful rendering of the history of popular music I have ever read!https://www.youtube.com/watch?v=nAq0RcKL45Q

Speeking of David Byrne, Jens Carelius seems to seek that strange charisma which Talking Heads took front stage, on Let it Fade for example... What is this song about ?

On Let it Fade, it´s actually me doing the vocal, so Jens is mostly doing some rhytmic stabs on the guitar (very Byrne-ish, yes). I wrote the lyrics to that one, and entered a state of mind that is the spiritual version of "House of the rising sun". It can be read as a love song between two people, or like the different parts of the same person evolving simultanously, but in leaps and in different ways.

I like that it has a humouristic feel to it, which is something we have from Talking Heads and Queen. I try to balance the tragedy and the comedy, he he.

Human vs Human is one of my favourites, for that expensive sound (chords...) and complex structure. How did you work on this song ? Is it taken from jams ? What is it about ?

That lyric is Jens´ work. He says that all his songs are love songs, so this one is no exception!

The song evolved from us playing together, just improvising. And Jens really liked the vibe of a recording from a jam, so he wrote some lyrics that went well with that feeling. I always have that feeling of driving a car in the middle of the night, with rain against the windows, when playing this song.

The instrumental section was improvised in the studio. We had the basic structure of the first part of the song. And we felt we wanted to take it further harmonically, so Jens and I quickly made a few harmonic structures, and then we did it really fast. One of my favourite moments on the album!

Why the album and song are called 'jewels of crime' ? It can read a bit like a provocative « jews of crime », when europe is again more and more folding on its supposed identity and rejecting the jews or minorities.

We didn´t think about that actually, until someone mispronounced it, and said "jews of crime". Oh my god, ha ha, that was not intended! No, jewels of crime is when you have aquired riches and fame that you do not deserve, or that you had to steal or lie to get. So for instance, it would fit very well with the earnings big companies make from global trade treaties. TISA/TTIP and other criminal activity happening behind closed doors, will result in great amounts of crimejewels...
Will you come to Paris to play soon ?

That would have been lovely! I love Paris, and french culture. We are all lovers of cheese, wine and french culture, so if anyone askes us, we will be there! It´s so great to play for new audiences, and would hope maybe someone could enjoy our music in France. If you know someone who might be interested in putting on a show with us, let us know! : )